Best Things To Do and Places To Visit In Paris – France

Best Things To Do in Paris 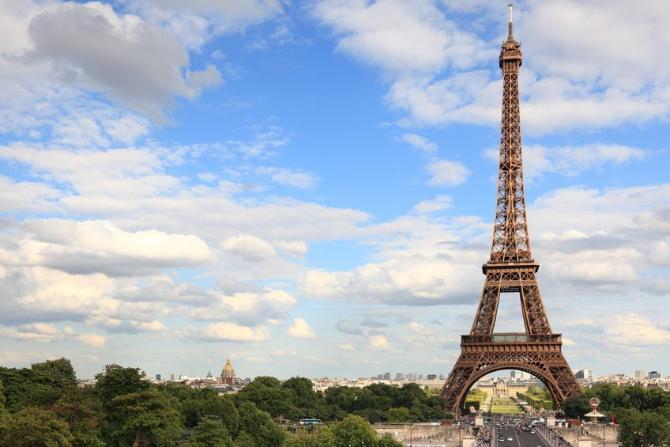 The Eiffel Tower, one of the must sees in Paris, can’t be missed from any spot while walking around in the city. It was built by the French engineer Gustave Eiffel which was already famous at the time for building bridges. He spent several years building the Eiffel Tower as a monument for the World Exhibition in 1889. Although today, it is without doubt one of the most recognizable monuments in Europe, one that can be compared to the Statue of Liberty in New York, the Big Ben is London and the Taj Mahal in India, it was not supposed to be permanent when it was first introduced. After the Eiffel Tower was built, it faced a lot of criticism from Paris artistic and literary elite. The fact is, that the tower was almost torn down sometime in 1909 while the only reason it was eventually kept was due to its ability to provide a perfect platform for transmitting antennas.
Slowly, the Eiffel Tower became a permanent part of Paris view, settling in the hearts of Parisians as the symbol of Paris providing it with the most beautiful and famous skyline during the evening.
It is possible to climb up the stairs as far as the third floor. Going up to the top though is possible only using the elevator. From the top of the Eiffel Tower, Paris at 1,050 ft (320 meters) is very romantic, especially in the evening, Things To Do in Paris
You can reserve your ticket or book a guided tour online which will skip the lines as well. 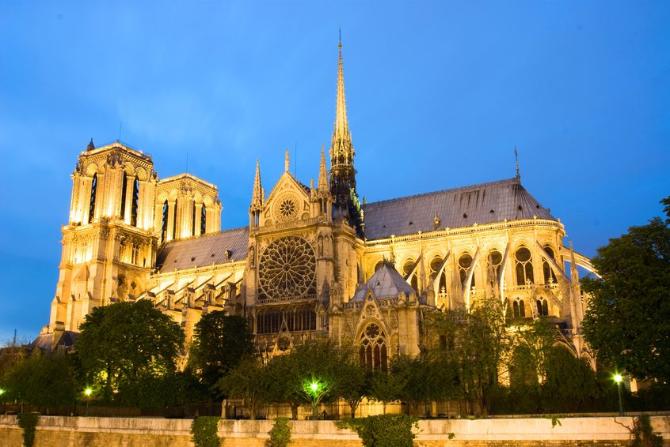 The Notre Dame Cathedral (Paris), the most visited site in Paris (10 million tourists each year), lies in the true heart of Paris and by some even of entire France. With so many people visiting the Notre Dame Cathedral of Paris unforgettable setting on the Seine, it has always been one of Paris top attractions. The Notre Dame Cathedral Paris is not only a Gothic architecture masterpiece but a site which was also the focus of Catholic Paris for 700 years. Although the cathedral is not France’s oldest or largest cathedral, it has very little completion in beauty and architectural harmony.
The work on the cathedral started on 1163 by Maurice de Sully, who was the bishop of Paris at the time. It took 182 years to complete this building in the summer of 1345. As Paris has changed , Notre Dame Cathedral (Paris) also changed and grown over the years trying to fit into the rapid changes Paris went through. At some point, the cathedral was already scheduled for deconstruction. It was mostly due to the incredible popularity of the book Hunchback of Notre-Dame(by Victor Hugo’s) which restored the interest in the Gothic period, the cathedral was stayed untouched while eventually restoring its original glory. In the middle of the nineteenth century, after it was severely damaged during the French Revolution, the world famous Architect Viollet-le-Duc was placed in charge of the renovations.
The Notra Dame cathedral is practically huge, The interior alone is 425 foot long, 150 foot wide and 115 foot high. It can practically host 5000 worshippers at a given pray. Some if its exceptional structures include the spectacular rose windows. Pay special notice to the 30 foot wide one rising above the huge pipe organ. Also notice the beautiful window to the north, which has remained untouched for the last 700 years!
Although its stunning interior, you may feel that for the Notre Dame Cathedral, Paris makes it more interesting from the outside. To fully appreciate the architecture you should spend some time walking all around it. Probably the best view of the Notre Dame de Paris is from square Jean XXIII. If you have time, visit again the Notre-Dame at sunset.

The entrance to the twin towers immortalized by Victor Hugo, rising to a height of 220 foot is from the North Tower. There are 420 spiraling stairs that will eventually bring you all the way up where you will find the cathedral most frightening statues in a very close range. The South Tower will reveal a spectacular view of Paris.

There are free 90 minutes guided tours of the cathedral in English at noon on Wednesday, at 2pm on Thursday and at 2.30pm on Saturday. 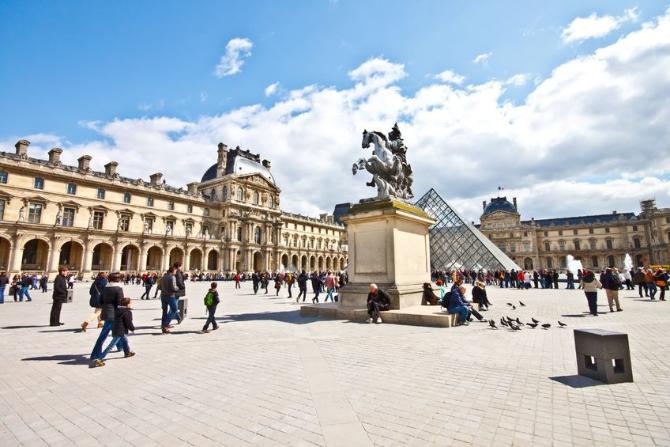 At the top of Paris top 10 attractions, The Louvre Museum (Paris) is in fact the largest art museum in the world and the home for one of the finest art collections anywhere to be seen including two of the most famous painted woman – the Mona Lisa and Venus de Milo just to name two out of the 30,000 exhibits displayed in the Louvre Museum.
The Louvre Paris was originally built as a fortress around year 1200 and was reconstructed again around 1650 for the personal use of the king. It was in 1793 that the French revolutionists have decided that this should become French’s first national museum.
Carefully planning of the tour in the Louvre Museum is important and will help you make the most out of it rather than making your way through the crowds, coming out tired and most probably disappointed. Remember that this gigantic museum stretches for almost half a mile (750 meters). Our best advice for the first time visitor would be – decide upfront what are the works that you must see, go for those and then settle in one of the sections for a pleasant stroll through the works of art and historical artifacts.
It was François the first and Louis the 14th who purchased most of these paintings and sculptures while the rest were contributed or purchased (and in many cases simply taken) by Napoleon later to be returned to the original owner’s family.
The most famous smile in the world, better known as the Mona Lisa, was ordered by François I from Leonardo the Vinci. It gained most of glory after it was stolen in 1911 by a Louvre employee, who simply left the building with the painting under his coat Things To Do in Paris
The entrance to the Louvre Museum Paris is a glass pyramid, one of the city’s most distinct symbols and what has become a tourist attraction by itself as no photo album of Paris seems to be complete without it. Notice the contrast between the modern glass structure and the classic interiors and how well the natural light flows in through the huge geometrically designed glass.
There are seven sub-galleries in the Louvre Museum distinctly defined by their content. The first hold some of the most important antiques from the ancient Egyptian world. The second is dedicated to Antiquities from the far-east. The third part of the Louvre Museum (Paris) is devoted to the Greek and Roman period while the forth is focused on all kind of Sculpture. Fifth and the most visited hold many famous paintings while the sixth is dedicated to the Decorative Arts. The seventh and last is all about Graphic Arts.
Some of the famous antiques are the Seated Scribe which can be found in the Sully wing, room 22, 1st floor, Venus de Milo which is located in room 7, in the ground floor, of the Denon Wing, the Code of Hammurabi in room 3, ground floor, Richelieu Wing and the famous Winged Victory of Samothrace which is located just opposite of room 1 in 1st floor at the Denon Wing.

The Denon wing of the Louvre Museum hosts many of the famous art treasures such as The Dying Slave by Michelangelo located in the ground floor at Michelangelo Gallery and some of the works of Raphael such as Botticelli and Titian. Other works in this wing includes the French masterpieces such as The Raft of the Medusa by Géricault’s in room 77, 1st floor